One artist that I have been researching quite closely has been Kasimir Malevich, with particular reference to his painting Black Square,1915. My initial interest had been related to his abstract work coming under Suprematism. What interested me at first were his use of titles, often referring to pictorial imagery – Red Square: painterly realism of a peasant woman in two dimensions. With further research I had found that his involvement with the Trans-rationalist Poets from 1910, working with illogical word combination had led him to arrive at a visual abstract equivalent to these word games, involving sliced colour planes and titles often referring to representational images. A friend forwarded me an article by Stephen Lueckig, in the Journal of Mathematics and Art (2010), A Man and his Square: Kasimir Malevich and the Visualisation of the Fourth Dimension.


In this article there is a suggestion that there may have been an alternative reason for Malevich’s use of titles. Firstly during 1915 Malevich, exhibited as part of a show of 14 young constructivist artists in St Petersberg 0,10: The Last Futurist Exhibition. Kasimir Malevich filled a room with 39 paintings in his new conceived style of Suprematism. What is interesting is Malevich’s use of titles and subtitles. As all the 39 paintings inhabit the same pictorial space. His chosen titles however, indicate something different. For example 5 of the paintings bore the subtitle Colour Masses in the Fourth Dimension. Then there are two paintings – Red Square: painterly realism of a peasant woman in two dimensions and Self Portrait in Two Dimensions. These two paintings also inhabit the same pictorial space as all the other paintings. Therefore through titles and subtitles Malevich entertained the notion that although his paintings visually occupy the same space as each other he is referencing some in 2D, 3D and even 4D.

There has always been a question why Malevich has titled and subtitlted his paintings. This particular articles stresses Malevich’s knowledge and historical knowledge of geometry. At the time there was a renewed prominence of a nineteenth century geometrician called Nikolai Lobachevsky and his ideas of meta-geometry or what has been dubbed as ‘imaginary geometry’ and later ‘Pangeometry’. Lobachevsky asserted that any number of geometries were possible and would prove as useful as Euclidean geometry (a mathematical system attributed to the Alexandrian Greek mathematician Euclid, whose elements is the earliest known systematic discussion of geometry) with the possibility of then creating new geometric rules unknown to Euclidean geometry.

Malevich jumped onto this idea of alternate geometries and if it could bypass Euclidean geometry then lines of thought could re-route around conventional logic. Malevich attempted to translate this through painting becoming what we know now as suprematism.

To an extent the term used as part of a subtitle by Malevich – ‘Colour Masses in the Fourth Dimension’ references this idea of an alternate geometric space. This is a very brief summary of the article as it becomes gradually more involved in mathematics and geometry but I thought this diagram below proved interesting in understanding Malevich’s idea of a possible alternate geometry. 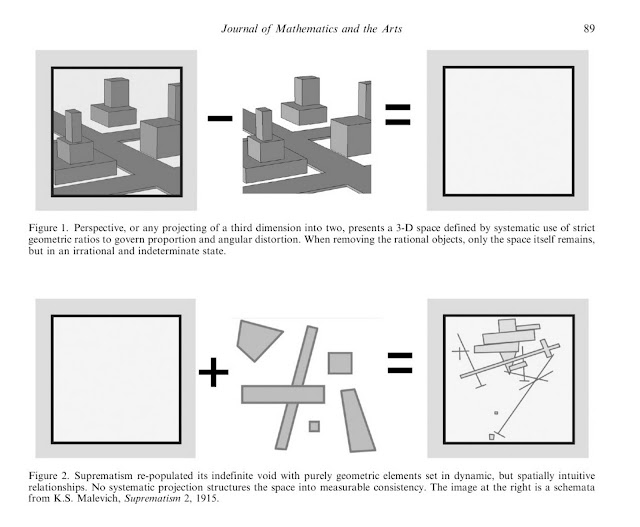